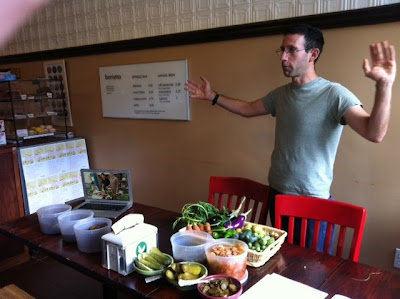 As a part of barismo's Patio Grand Opening on Friday, we had a special presentation by Jon Orren, school teacher at Newton South High School. Jon has been involved with the Sustainable Agriculture Project at the high school for the past couple of years. The schools project is a three season educational garden that grows produce for use at the school and provides a tool for educating students about food systems, sustainability, and agriculture.

Over a year ago Jon approached us at barismo to see if he could get his hands on 'chaff', a by-product of coffee from the roasting process. He had done some research and found some interesting uses and benefits, particularly the ability of chaff to greatly improve soil composition and replenish nutrients. We started collecting our chaff and Jon began stopping by every few weeks to pick up a trash bin full of the stuff.

Using Chaff to Enrich Soil. When used correctly, Chaff can significantly replenish the soils nutrients, it does so in a way that even coffee grounds cannot (grounds can be very acidic and must be mixed correctly to maintain a proper Ph level). Having a way to replenish soil is especially important for a garden that is being used through three seasons. Jon's experience is that the the soil was richer with more organic life present and the crops came back with very healthy yields. In order to access all of the benefits that chaff has to offer, one must be aware of how to use the chaff correctly.

Working with Chaff. When chaff is wet it will clump together into a heavy dense mass that adheres to itself very easily. Wet chaff masses are very slow to breakdown and if they are left in that state they will prevent water from penetrating above or below causing bacteria or mold in some areas and dry soil in others. Jon brought in an example of a wet dried chaff clump that resembles a hard piece of paper mache. After some experimentation with mixing chaff with soil or mulch, they found that a 1-to-5 ratio (chaff to mixer) worked best. This mixture keeps the chaff from adhering to itself and turning into hard clumps, this allows the chaff to break down and begin to properly release the valuable nutrients back into the soil.

Putting your garden to bed. At the end of the growing season, when the soil is at its most depleted state, there is a technique that can be used to replenish the soil using chaff. A thick layer of dry chaff is evenly distributed on the surface of your garden bed and covered up with burlap. The dry chaff Must be covered with something like strips of jute (the burlap sacks that coffee comes packaged in) to keep it from being blown away in the wind. From the end of the fall through the winter the thick layer of chaff has enough time to decompose and you avoid the problematic clumps in your soil. In the spring your soil is fertile and ready to go for the next season! 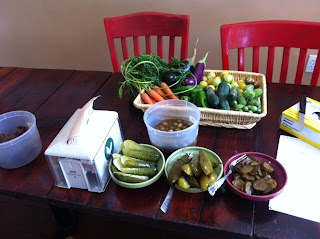 At Newton South High School Jon has had so much success with the yields of produce that he has had to find creative ways to make use of the food they have grown. They have enough produce to provide faculty with a small CSA program, however there is still an abundance. Jon has been pickling much of the produce so it has a longer lifespan. Jon brought us a variety of pickles and kimchi to try out at the event. We also got some freshly picked produce to take home. Some of the more unique items were the West Indian Gherkin Cucumber (an egg shaped cucumber with peculiar spikes, from the Monticello seed bank), and a small grape sized cucumber called a Mexican Minature Watermelon.

We had a great turn out for the event thanks to everyone who showed up to hear Jon, and thank you Jon for sharing! We will list any links that Jon sends us for resources about using chaff in your home garden.
Posted by timborrego at 9:00 AM